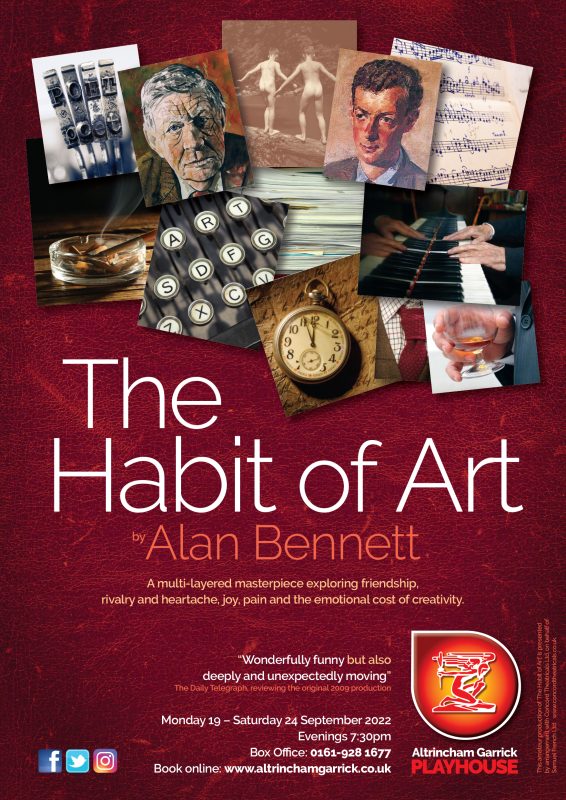 The Habit of Art – By Alan Bennett

Exploring friendship, rivalry and heartache this multi layered masterpiece examines the joy, pain and emotional cost of creativity.
Actors are rehearsing a play called “Caliban’s Day” at the National Theatre about Benjamin Britten, sailing uncomfortably close to the wind with his new opera “Death in Venice”, who is seeking advice from his former collaborator and friend, W H Auden. During this imagined meeting in 1972, their first for twenty-five years, they are observed and interrupted by, amongst others, their future biographer and a young man from the local bus station.
Alan Bennett’s play is as much about the theatre as it is about poetry or music. It looks at the unsettling desires of two difficult men, and at the ethics of biography. It reflects on growing old, on creativity and inspiration, and on persisting when all passion’s spent: ultimately, on the habit of art.
The Habit of Art premiered in November 2009 at the Lyttelton Theatre at the National Theatre, starring by Alex Jennings as Britten and Richard Griffiths as Auden (the latter replacing Michael Gambon, who had to withdraw from the production due to minor ill health).
Age Guidance: 15+
Warning: This production contains strong language, adult themes and scenes and dialogue of a sexual nature.
tickets

Are you an Altrincham BID business hosting an event? Would you like to list it on Visit Altrincham? Submit your event and we’ll review and post it!